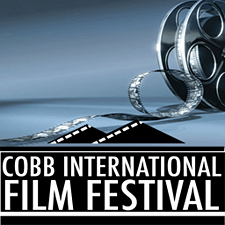 The Cobb International Film Festival is a collaboration between Long Shot Productions, Cobb Travel & Tourism and The Earl and Rachel Smith Strand Theatre.

Held in the Earl and Rachel Smith Strand Theatre on beautiful Marietta Square in Marietta, Georgia each year, this festival is a meeting place for filmmakers and people who are interested in the world in all its variety and different approaches to life. The festival offers filmmakers a platform to introduce their work and discuss topics shown in the film as well as the filmmaking process to encourage and create dialogue between people.
The festival accepts feature-length films, short films and documentary films of all lengths from filmmakers at all different levels.
In 2016, the Cobb International Film Festival began a partnership with Film Racing and includes the Screenings and Awards Program for the international finalists of the 24-Hour Film Race as part of the festival.

The Cobb International Film Festival has partnered with Vet Tix and donates full-festival passes for them to pass on to members of the US Armed Forces. Vet Tix provides tickets to events which reduce stress, strengthen family bonds, build life-long memories and encourage service members and veterans to stay engaged with local communities and American life. We support our troops by honoring their service and providing positive family and life experiences, during and after their years of service to our country.

Check out the screening schedule here.