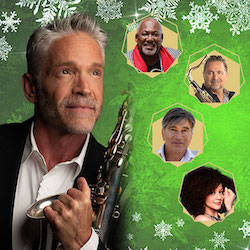 Koz and Friends will perform fresh renditions of timeless Christmas classics – as well as a Chanukah medley! – and hits from their respective catalogues. The festivities will be extra-special this year. In 2020, Koz and Friends mounted one of the most-successful livestreams amid the worst days of the pandemic. The Christmas livestream allowed fans to enjoy the beloved traditions of the show from the comfort and safety of their own homes. This year, Koz and Friends are elated to be back at many of their favorite venues, performing live for audiences on the 2021 tour. After the challenges of 2020, there’s never been a time when “we need a little Christmas” more than this year.

Koz’s new album also brings a sense of renewed optimism. Released exactly 30 years and one day after his self-titled debut album, A New Day is his 20th album overall and first full set of original material in 10 years. Conceived and recorded entirely under the umbrella of COVID-19, the album reached the No. 1 position on numerous jazz charts, including iTunes and Amazon.

Over the course of his career, Koz has received nine GRAMMY nominations and has logged 12 No. 1 albums on Billboard’s Current Contemporary Jazz Album chart, including 2018’s Summer Horns II From A To Z. His seven holiday albums include 2019’s Gifts of the Season and 2014’s The 25th of December. The tour, now in its 24th year, has received nationwide critical acclaim.

“By all rights, smooth jazz should own the holiday season, and the saxophonist Dave Koz is better positioned than anyone to make it so.” – The New York Times
“Some might say it wouldn’t be Christmas without Santa, but [here], it’s not Christmas until Dave Koz comes to town.” – The El Paso Times