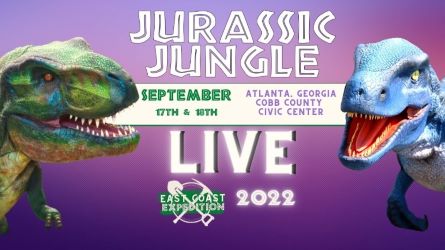 Join Jurassic Jungle LIVE for an immersive experience millions of years in the making. Get up close and personal with dinosaurs so real, you won’t believe your eyes at the LARGEST touring dinosaur show in the U.S.! Featuring mind-blowing special effects, professional puppeteers, and the most realistic dinosaurs in the country for this fifty-five-minute prehistoric production!

Jurassic Jungle LIVE is a thrilling new stage adventure that follows our team of Conservationists as they help protect our dinosaurs from an Evil Professor with nefarious intentions. Along the way, you’ll meet 11 dinosaurs in our live educational stage show featuring the country’s only free-moving dinosaurs including the BIGGEST Tyrannosaurus Rex, Triceratops, Ankylosaurus, and more!