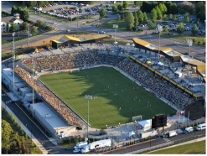 The Big South Conference released the 2021 spring football schedule on Monday, a four-game slate with the league champion earning the automatic bid to the FCS Playoffs.

In search of its third Big South Conference championship in the last four seasons and its fourth consecutive FCS Playoffs appearance, Kennesaw State is looking to join Coastal Carolina as the only programs in league history to make the playoffs in four consecutive seasons.

The Owls will open league play on Saturday, March 13, playing host to Charleston Southern at Fifth Third Bank Stadium, before traveling to Gardner-Webb two weeks later for a matchup with the Bulldogs.

The NCAA Division I Football Championship will be played on Saturday, May 15 or Sunday, May 16, 2021 at Toyota Stadium in Frisco, Texas.

For the spring 2021 season, the field for the FCS Playoffs will be reduced from 24 to 16 teams. The Big South Conference will be one of 11 automatic qualifiers, with five at-large selections by FCS Playoffs selection committee.