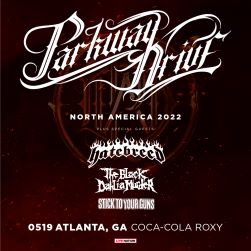 Face coverings are strongly recommended for fans who are not fully vaccinated, unless actively eating or drinking, per CDC guidelines.

NOTE OUR CLEAR BAG POLICY:
Only the following bags are allowed:

Named after a rural countryside road, the Australian metalcore band was formed in 2003 by vocalist Winston McCall, guitarists Luke Kilpatrick and Jeff Ling, drummer Ben Gordon, and bassist Jia O’Connor. They have since built a respected name for themselves in the Australian hardcore scene through opening for fellow Australian acts as well as American bands.

Since their first album’s release in 2006, the band has released five more albums while experimenting with their sound for a varied, yet metal feel. Their latest album Reverence arrived in the spring of 2018 and featured singles “Wishing Wells” and “The Void.” ~ Corey Apar

Any band that has earned an army of devout followers through dropping seven killer full-lengths – and touring their collective ass off for sixteen years – could perhaps be forgiven for thinking they could take it easy as they wade into their eighth release. But that’s just not The Black Dahlia Murder’s style, and Nightbringers is testament to that. Having released their most accomplished, aggressive, and emotionally diverse music to date in the form of 2015’s Abysmal, the Michigan quintet have once more pushed themselves to new heights, and the 34 minutes of searing melodic death metal that comprises Nightbringers is riveting listening.

STICK TO YOUR GUNS

Since emerging in 2003, Southern California’s Stick To Your Guns—Jesse Barnett [vocals], Andrew Rose [bass], George Schmitz [drums], Chris Rawson [guitar], and Josh James [guitar]—have merged socially conscious and outspoken lyricism with hardcore energy and hammering metallic force. They took a bold step in a new direction on their sixth full-length album, True View [Pure Noise Records]by expanding their grasp of melody, amplifying the haunting clean vocals, and incorporating actual phone conversations to thread together a narrative of self-realization. It was only a matter of time before they got this personal. Through countless shows and a steady stream of music, the band attracted a devout fan base. Among many accolades, Diamond would bow at #1 on Billboard’s Heatseekers Chart in 2012 as 2015’s Disobedient went Top 100 on the Billboard Top 200 and clinched #2 on the Hard Rock Albums Chart. Most recently, the 2016 EP, Better Ash Than Dust, repeated the #2 debut on the Hard Rock Albums Chart and earned acclaim from Alternative Press, Revolver Magazine, New Noise Magazine, and more as the single “Universal Language” ignited over 1.5 million Spotify streams. Moreover, 2017 saw Stick To Your Guns make history, becoming “the first American hardcore band to play East Africa”in Nairobi, Kenya. Along the way, Stick To Your Guns toured across the globe with everyone from Every Time I Die and The Amity Affliction to BlessTheFall and Being As An Ocean in addition to multiple stints on the Vans Warped Tour. True View will once again bring them around the world in 2017.