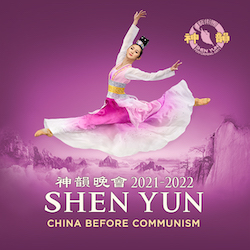 Shen Yun Performing Arts is the world’s premier classical Chinese dance and music company, established in New York in 2006. It performs classical Chinese dance, ethnic and folk dance, and story-based dance, with orchestral accompaniment and solo performers. For 5,000 years, divine culture flourished in the land of China. Through breathtaking music and dance, Shen Yun is reviving this glorious culture. Shen Yun, or 神韻, can be translated as: “The beauty of divine beings dancing.”

The culture of ancient China was divinely inspired.

Shen Yun invites you to travel back to the magical world of ancient China. Experience a lost culture through the incredible art of classical Chinese dance, and see legends come to life. Shen Yun makes this possible by pushing the boundaries of the performing arts, with a unique blend of stunning costuming, high-tech backdrops, and an orchestra like no other. Be prepared for a theatrical experience that will take your breath away!