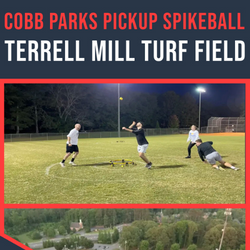 Pick-up is a great way to meet new people and learn to play Spikeball. Players of all skill levels are encouraged to join! Whether you have never played, are a beginner or intermediate player, or have played for years Cobb PARKS is excited to provide a place for all to play each week! Cobb PARKS will provide Spikeball pro sets, but you may also bring your own.

Spikeball is a team sport played by two teams of two players. Opposing teams line up across from each other with the Spikeball net in the center. Once the ball is served players can move anywhere they want. The object of the game is to hit the ball into the net so that the opposing team cannot return it.