The Firebird and Music of Remembrance 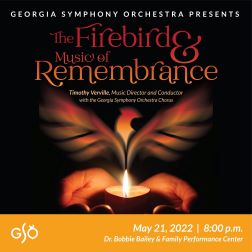 Three magical works conclude the GSO’s 71st season. American Jennifer Higdon’s Blue Cathedral is one of her most performed works. The work, written in memory of her brother, creates an atmosphere of reflection and understanding of life’s journey.

Igor Stravinsky’s Firebird Suite (1919) is a collection of music from the ballet of the same name. In it, a young prince falls in love but is unable to fulfill it without the help of the mythical firebird. Stravinsky’s orchestration and writing, ranging from lush and exotic to barbaric, propelled the young composer to his early fame.

Luigi Cherubini’s Requiem in C minor was beloved by Beethoven, who considered him one of his greatest contemporaries (which may have led to the performance of this work at his funeral.) This work features the return of the Georgia Symphony Orchestra Chorus for the first time since the pandemic to a GSO Classics performance.