The Soul Knights Present A Tribute To “Motown’s Greatest Hits” 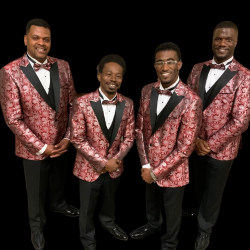 The Soul Knights hail from The Grand Strand of Myrtle Beach, SC where they met and performed at theaters with other cast members.  In 2019, these men with their smooth, crooning vocals and high energy performance formed their own group to pay tribute to the iconic music of the 60’s, 70’s, and 80’s produced by Barry Gordy and the Motown label in “Hitsville, USA”.  Their personal love for the music of this era is their driving force to share it with audiences.

The Soul Knights’ Southeastern tour brings their show, “Motown’s Greatest Hits” to The Strand Theatre on July 9th at 7:30 PM for a two-hour musical journey through many of Motown’s greatest legends such as The Four Tops, The Temptations, Smokey Robinson and the Miracles, Stevie Wonder, The Commodores, The Jackson Five and many others.

They have performed at city-owned theaters, festivals and amphitheaters, a few with Greg Hill’s Delfonics Revue, The Supremes Revue from New York and had a residency at the Asher Theater in Myrtle Beach, SC.

A Facebook review from 2021 Barnes Amphitheater concert reads: “They are Las Vegas quality.  I have seen acts out there that couldn’t stack up enough to shine these guys’ shoes, doing six nights a week in the big showrooms…….So nice to know and love every song in the show”.

You do not want to miss this Motown experience-an evening of soulful music from The Soul Knights!