8 SPOOKY SPOTS TO GET IN THE HALLOWEEN “SPIRIT”

Cobb County, Georgia is overflowing with tricks and treats for visitors during the creepiest month of the year, October! Visit some of the most spine-chilling areas north of Atlanta including Civil War battle sites, haunted theme parks, and cemeteries surrounding horrifying urban legends. We are sure you will get in the Halloween spirit when you check out these eight spooky spots.

1. Kennesaw Mountain Battlefield, north of Atlanta, was the site of a bloody battle of the Civil War in 1864. More than 4,000 men perished at this fight, mostly on the Union side, and are said to still haunt the fields to this day. The grounds are open to the public with hiking trails and exhibits on the war, however an eerie energy has been reported since this gory battle. Sightings of ghostly soldiers walking in the distance, the sounds of gunshots and cannons, uncomfortable cold spots, and smells of blood and gunpowder lead visitors to believe some soldiers never really left the battle. 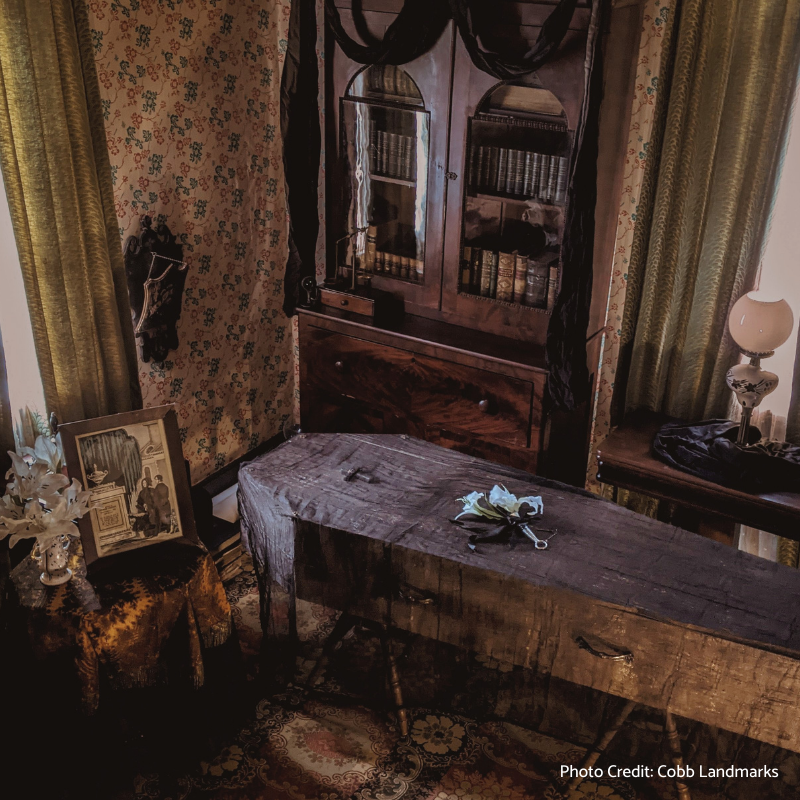 2. Root House Museum in Marietta, Georgia was the home of William Root, the town’s first druggist and a merchant. As the oldest house in Marietta, multiple claims of paranormal activity have been reported in the main bedroom of the house including sights of a spirit peering from the windows, believed to be Mrs. Root. Museum operators also claim that the antique rope bed sometimes appears to have been slept in when the house is opened in the mornings. Mrs. Root’s father passed on October 11 when it was believed evil spirits surround a home when someone passes. Covering mirrors kept those evil spirits from taking you, too. During the month of October, The William Root House is decorated for a Victorian-style funeral and offers flashlight tours on Friday nights! 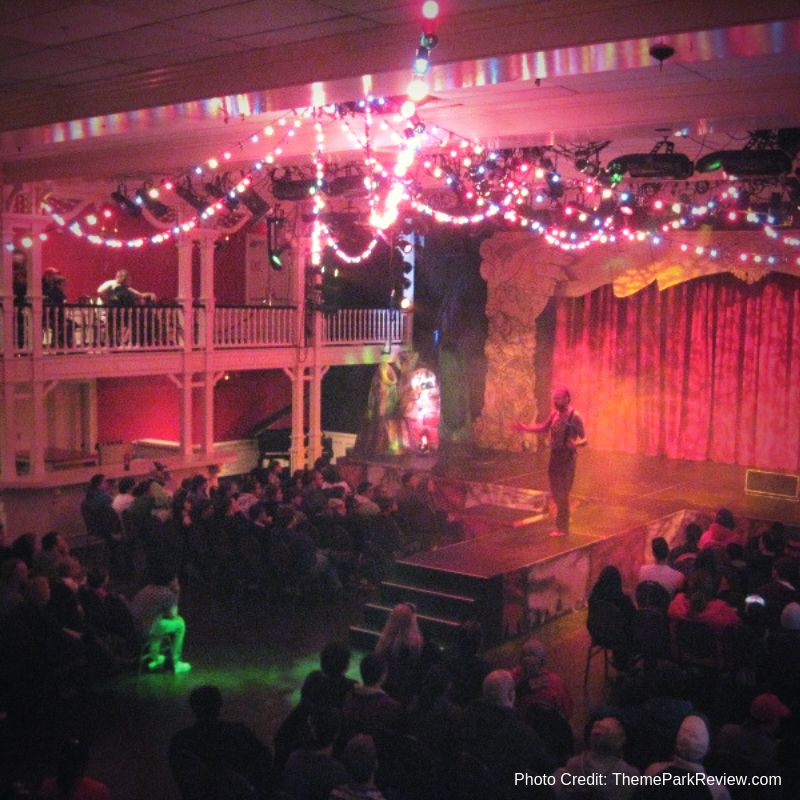 3. Six Flags Over Georgia has allegedly been haunted since opening in 1967. According to legend, an actor by the name of “Joe” was supposed to star in the opening number for the very first show at the Crystal Pistol Music Hall, but he was killed in a car accident on the way there. Many employees and guests believe Joe is still waiting to perform that number. His ghost has been seen at the edge of the balcony watching performances, and witnesses have seen orbs and heard a man singing after the hall was closed for the evening. Joe has also been blamed for moving props from the stage out to the railroad tracks beside the building. Today, guests can enjoy a truly terrifying experience in the park after the sun goes down during Fright Fest. 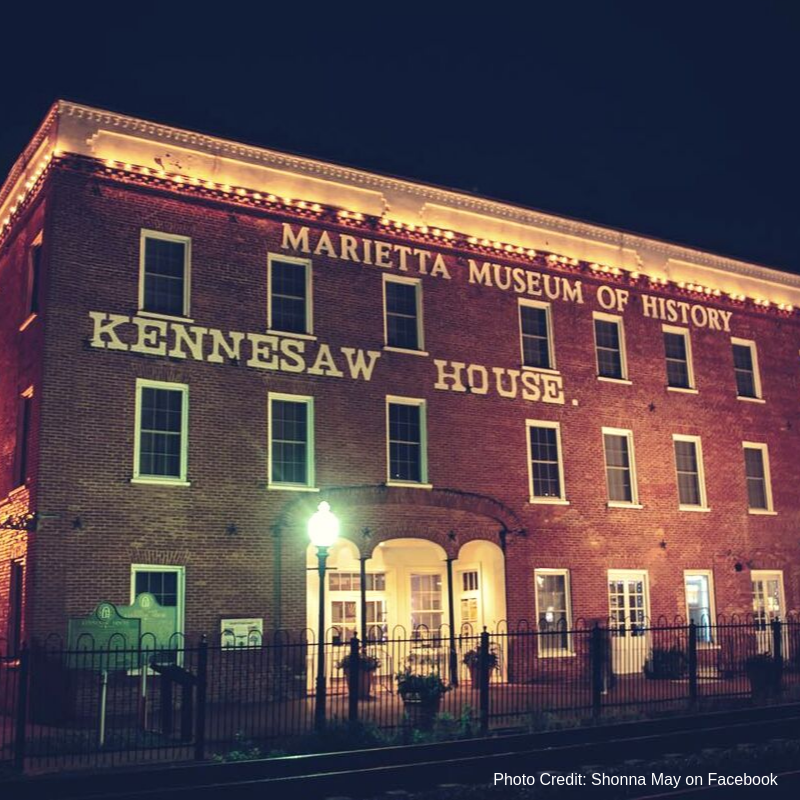 4. Kennesaw House was used as a hospital for soldiers during the Civil War. Now it is home to the Marietta Museum of History and more than 700 ghosts! After the Civil War, the building served as a hotel, and one of the most striking supernatural accounts comes from a hotel guest. When the guest stepped off the elevator onto the third floor, he witnessed a scene from a Civil War hospital, complete with a surgeon bending over a wounded man. Thinking he had walked into some kind of re-enactment, he quickly retreated into the elevator and returned to the first floor. When he asked the front desk agent what was happening on the third floor, the employee was perplexed. Both the clerk and the guest returned to the third floor only to find an empty hotel hallway. More recently, a child reported seeing a woman dressed in a light blue antebellum style dress with pink flowers around the neckline and bodice while on a field trip to the Marietta Museum. This woman smiled at her and then vanished. She claims it is a woman in a picture at the museum. Learn more about this and other haunted Marietta sites on the Ghosts of Marietta Walking Tour. Each weekend in October, the Marietta Museum of History hosts Fright at the Museum, a guide-led paranormal investigation and tour around Marietta with a trained paranormal investigator that will take you along the first two floors of the Kennesaw House! Brand new this year, a Spiritual Psychic and Medium will be joining the investigation to help communicate with the “other side”! 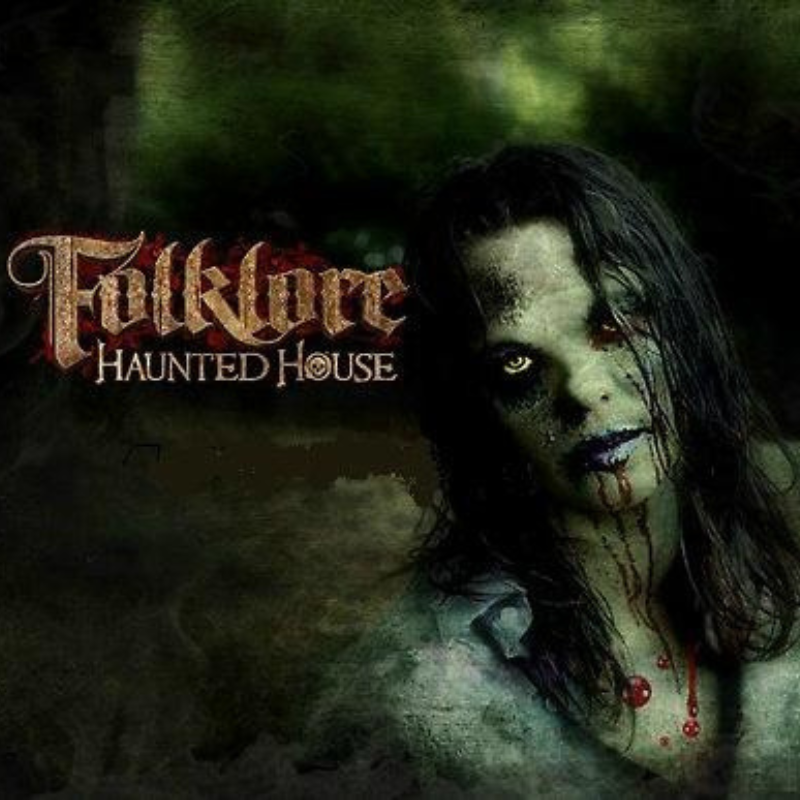 5. Folklore Haunted House has been called Atlanta’s Scariest and Most Spectacular Haunted House for years. This Halloween season, Folklore Haunted House is unleashing two terrifying and elaborate haunted houses, plus a horror-themed carnival to test your skills under fear, called Midway of Mayhem. Brave yourself to walk into The Manor, a once beautiful estate where evil has infested from top to bottom with rotting walls, dusty tombs, and the corrupted souls of its former victims who stalk anyone unlucky enough to be caught inside. Wander your way through Overload as you tour the mining vessel ISS Riker that went missing on a mission in deep, uncharted space and learn of the horrifying fate of its crew while you tread carefully through the damaged bowels of the ship. Be sure to watch your back! Learn why USA’s Greatest Haunts has named it one of the Best Haunted Houses in the country when you tour The Manor, Overload, and Midway of Mayhem. 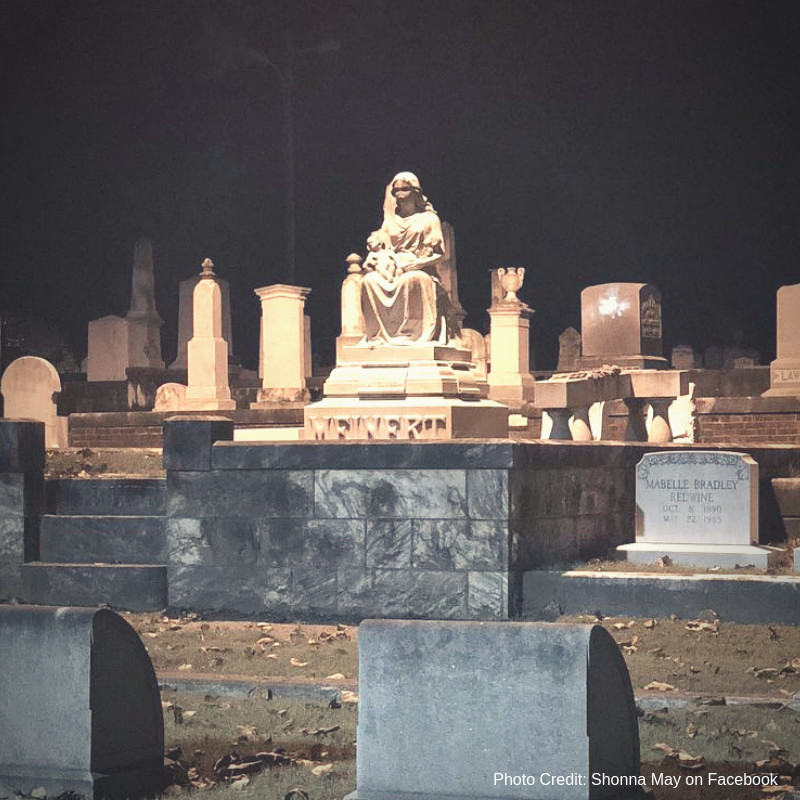 6. The Statue of Mary Meinert in the James Episcopal Church Cemetery is one of the spookiest spots in all of Cobb County. Mary Meinert and her family are said to have lived in a large house near the Marietta National Cemetery in the 1800s. One tragic day, Mary heard her children crying from the top floor of the home. She realized the house was on fire and she ran to save them, but all three died in the fire. Her striking statue sits eerily in the cemetery, and some say this statue weeps for her infant twins with tears so real that they roll down her face and dampen the bodice of her gown. Others say if you walk around her grave 13 times and say “Oh Mary, Oh Mary what happened to your babies?” You will hear a woman cry and tears will begin to roll down the statue’s face. 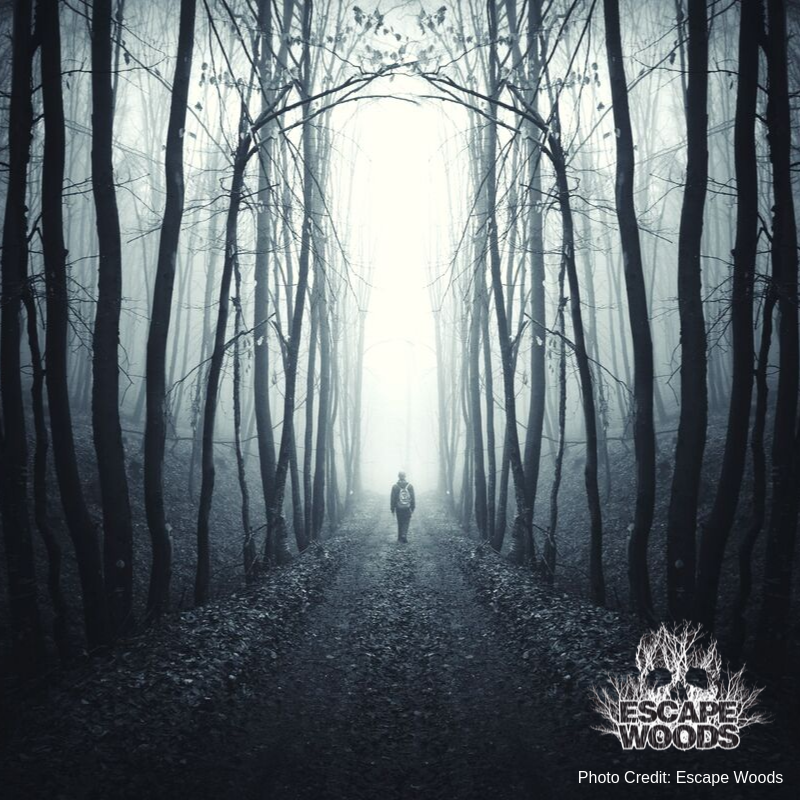 7. Escape Woods is taking the creepy up a notch in Powder Springs this Halloween season with six spooky escape challenges – The Hunted: The Hollow Grove Ripper, The Bunker: Aftermath, Murder Mystery: Legend of Sleepy Hollow 1990, The Maze: Curse of the Dragon, The Pig Farmer: Cult of the 7 Sins, and their most popular- Hopper’s Cabin: The Cabin from Stranger Things. After dark, some of the games will also feature terrifying actors designed to elevate the experience. Can you escape?

8. The Concord Covered Bridge has an eerie story connected to it. According to the Urban Baboon, a couple of little girls drowned (or were drowned) in the waters below the bridge. According to the lore, if you park your car at night, turn it off and leave some chocolate on it, you’ll hear the girls climbing on the car and laughing. When you turn the car back on, the candy will be gone and there will be handprints on your car. However, it’s a highly traveled, single-lane bridge, so it’s not a good idea to turn your car off.

Book a tour on one of Cobb County’s ghost tours. Ghosts of Marietta offers tours by trolley or by foot through Civil War sites, antebellum homes, and cemeteries all year long. Acworth Ghost Tours run through the end of October and highlight hauntingly historic spaces throughout Acworth, Ga.

Check out the gallery below to see October fun from the past. Don’t forget to share sweet photos of your fall festivities with us by using #AtlantasSweetSpot on Facebook, Instagram and Twitter. Your photo could be featured on our social media pages! To see events happening in Cobb County, click here.